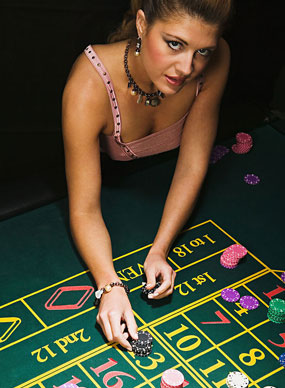 One concept that’s really increased in popularity over the past few years is the blackjack party pit. Just like the name suggests, blackjack party pits feature a fun and festive atmosphere where music is blaring, beautiful women are dealing the cards, and more women are in the background dancing. The basic idea behind blackjack party pits is pure enjoyment, which is definitely alluring to the average player. However, you also have to be cautious when playing at these tables, and we’ll explain why below.

Casinos have to find a way to pay for all of the dancing girls and fancy table setups, so they often slip unfavorable blackjack rules into party pit games. One of the more common moves is to make 6:5 payouts on natural blackjacks instead of 3:2 payouts. And this is huge because it increases the house edge from a potential 0.5% to around 1.9%. As if this isn’t bad enough, sometimes casinos will also allow the party pit dealers to hit on a soft 17, which pushes the lowest possible house edge to over 2% (when combined with 6:5 payouts). Even if these blackjack rules aren’t present, sometimes there are other unfavorable rules too that you need to watch out for.

Now you might wonder why people would want to play blackjack at the party pits knowing this. And the answer is that many people don’t even realize there’s much of a difference in the house rules from standard tables to the party pits. In fact, most of the people who sit down to party pit games are novice players who just don’t know any better.

Should you play at Blackjack Party Pits?

Before you make the decision to play at a party pit table, the first thing you need to do is learn the casino’s blackjack rules. Not all party pits are out to increase the house edge on players to an enormous amount so they can haul in profits. Instead, some tables will just include subtle negative rules such as not being able to re-split aces, and not having the chance to double down after splitting.