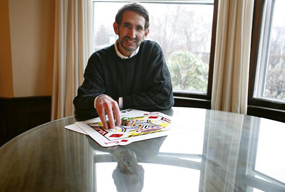 Bill Kaplan and J.P. Massar formed the basis for what would become the most famous card counting team in history – the MIT Blackjack Team. Interestingly enough, the two Americans met at a Chinese restaurant in Cambridge, Massachusetts of all places. Massar overheard Kaplan talking about blackjack card counting in the restaurant, and walked over to introduce himself, which is where our story begins.

Harvard MBA graduate Bill Kaplan was already a successful card counter by the time he met MIT student J.P. Massar. He’d successfully played with, and managed a team that made thousands of dollars throughout the late 1970’s. However, the team grew tired of Las Vegas casinos, and wanted to branch out into Europe and other parts of the world. Kaplan had no interest in doing this, so he left his former team.

Massar wasn’t nearly as successful as Kaplan at card counting, and was in fact wondering if the MBA graduate would help him out. Luck was in Massar’s favor because Kaplan had just parted with his former blackjack team, and was looking for a local group to play with.

After going to Atlantic City to watch Massar and the other MIT students play, he saw numerous card counting errors such as using different systems, making betting mistakes, arguing over irrelevant math formulas and putting little time in at the blackjack tables. Based on his observations, Bill Kaplan told Massar and his friends what they were doing wrong, and agreed to train them if they followed his rules and training schedule.

The players reluctantly agreed to let Kaplan run the show, and they all trained together while using a uniform blackjack card counting system. The results were a huge success as the MIT Blackjack Team worked just like a profitable business. There were investors who staked the team – earning 250% on their investments – while the undergraduate students were earning around $80 an hour.

In most cases, blackjack card counters are lucky to gain a 2%-4% edge over the house, but with the MIT Blackjack Team’s advanced training methods and practices, they reportedly had as high as a 4% edge over casinos (through aid of shuffle tracking). Throughout the 80’s, the team branched out to 70 players and remained profitable the whole time.

For a while, Kaplan dropped out of the card counting game, only to partner up with Massar again in the early 90’s to form Strategic Investments. Now the MIT Blackjack Team was more profitable than ever, and it’s now 80 members generated millions of dollars in revenue. But as with all good things, the team eventually came to an end since multiple casinos did everything in their power – including hiring private investigators – to put this massive card counting network to an end. In 1993, Strategic Investments paid out its final dividends and dissolved.